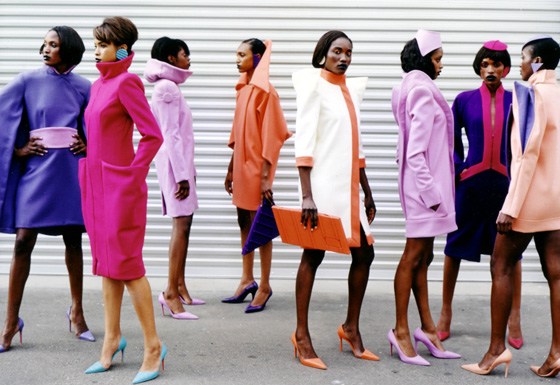 *this first appeared on Brits & Pieces

It’s no secret that being black in this world is probably one of the hardest things to be. And being a black woman is even harder…

A long history of the oppression of black people painfully lingers in cities around the world. Many of us are still being treated in a way that is unjust and unequal compared to our white equivalents. In the media, black people are often reduced to body parts – the over-exaggerated bum, the big lips and ‘nappy’ hair, an image that has been hard to shake.

A clear example of this is the creation of golliwogs, recently having come back into the limelight. These dolls which were made to be a caricature of black people, are still being sold in the UK. The visual design of golliwogs – pitch-black skin, bushy hair, goggling eyes, bright red lips and striped trousers – is unmistakably based on outdated and hurtful parodies used by blackface minstrels. To add insult to injury, a recent poll showed that the majority of Brits do not think that golliwog dolls are racist. Overall, a shocking 63% of those surveyed believed that selling or displaying a golliwog was not racist.

So, our beauty has never truly been recognised in the western world. Instead, it is contorted into something inferior and ugly.

And for the longest time we had no control over this. Without having any input into what filters into social media, we often have to accept, but work against how we are portrayed.

But this bleakness is being changed back into something positive, through taking full control of our aesthetic. That is, how the beauty of our blackness is depicted. There are more positive black representations than ever that show our best and authentic selves.

An artist doing this is young photographer Quil Lemons with his creation “Glitterboy”, an ongoing portrait and interview series of black boys and men whose faces are painted with glitter. It sounds simple, but it challenges the notion of black male masculinity and how beautiful it can be. It juxtaposes the assumed aggression, violent tendencies and inability to stay out of trouble – narratives often imposed on black men. Using glitter and a gentleness that’s hardly associated with black masculinity.

Lemons notes, ‘There’s a privilege that comes along with being white when it comes to self-expression, sexuality, and fluidity. Black men really don’t have that.’

And I’m inclined to agree with him, we aren’t afforded the same spaces to be ourselves outside of the stereotypes assigned to us.

Lemons’ creation represents the clear shift that is happening in creating these spaces by force. Some have begun to regard it as Afro-Surrealism where we have become skilled in creating an entirely different world organically connected to this one. Films like Get Out and TV shows like Chewing Gum and Insecure are great examples of this. By being black written and directed, they show our own unique stories and experiences in the right way.

It is also being related to movements like Négritude and, later, Black Arts. Both movements were incited by a desire on the part of black people to define their own identities, rights, and cultures in spite of the influence of colonialism and the injustices addressed by the civil rights and Black Power activism of the ’60s and ’70s.

This effect is also seen in the hiring of prominent Black people into important positions in the beauty world, like Edward Enninful becoming the first black editor-in-chief for British Vogue as well as Designer Virgil Abloh who has been named as the new artistic director of Louis Vuitton menswear. Enninful’s work has already been dubbed a ‘new day’ for Vogue and noted for its diversity. Models and celebrities such as British-Ghanaian model Adwoa Aboah, Hijab wearing Somali-American Halima Aden, superstar Rihanna, force of nature Oprah and Sudanese-Australian Adut Akech are all in his long line up of diverse cover girls.

It seems then that the black aesthetic is literally ‘in Vogue’.

But with all movements that become popular, there is also a sinister side. With the rise of the black aesthetic, the issues of colourism within the black community has become ever more prominent. Black entertainers are confined to stricter archetypes and are constantly battling colourism within the media industry.

Let’s have a look at the music scene in the UK. When looking for black female singers that have peaked in success over the past few years.

We have phenomenal artists like NAO and Alexandra Burke that have not received half the success they deserve in comparison to other R&B singers in their category that offer us similar sounding records in a whispery tone, but have the privilege of racial ambiguity. Artists like Zara Larsson, Dua Lipa, Ella Mai and Mabel are hailed as the stars of the genre, with notably no black counterpart in sight.

Whereas if we skip over to the UK rap scene we have a list of talented dark-skinned female rappers: Ms Banks, Nadia Rose, Lady Leshur, Little Simz – just to name a few. They too also face issues of colourism, as they are definitely not given the limelight as much as other light skinned female British rappers. However, we all know that rap is deemed as a male sport and often times darker skin is conflated with masculinity. So, is it any surprise that darker skinned women in the UK are seeing more success with rap than they are with R&B?

These issues are not new but the conversations are. We’re hearing more dark-skinned women confidently speaking out against colourism, fearless of being branded as angry and bitter, and lighter skinned women and black men slowly accepting their privilege and role in perpetuating certain narratives. Maya Jama had a hard pill to swallow when she was confronted on her past tweets about dark women. Her ignorant comments were from a place of privilege as a light-skinned, half Somali woman and she notes not understanding the seriousness of her tweets at the time.

Yet, it’s often this lack of seriousness, that has helped perpetuate colourism so much so that many young people partake in the mocking of dark-skinned women without thinking how much it affects and hurts – the damage it can have on self-esteem for years to come and how it filters down into the next generation.