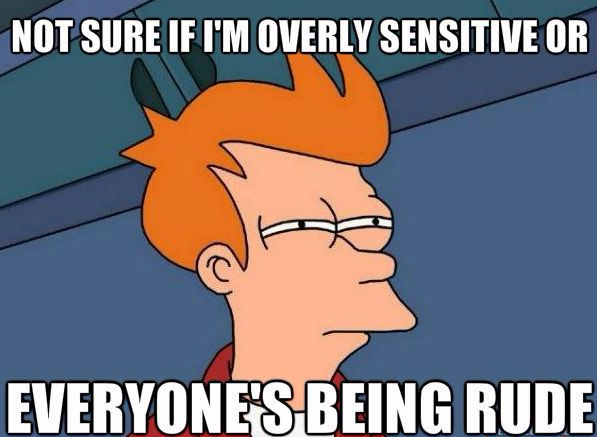 So as you can guess from the title this is a bit of a random -thoughts post, but interesting to discuss nonetheless! I’m a super sensitive soul and often wonder if I’m just easily distressed or if my friends are rude…

Firstly, lets define what it means to be a sensitive person (love a definition!):

And if you can identify with more than four of the above – chances are you’re a really sensitive person (HSP).

“Are you, like, really offended right now? You should take a chill pill.”

This can be so annoying to hear and deal with, especially when genuine emotions are involved.

But this isn’t necessarily a bad thing! Being super sensitive has helped me navigate through life as well as protect myself. That is, my sensitivity often alerts me to situations that will not bode well to my well-being.

However, being a HSP can also wreak havoc in relationships, friendships and even in the workplace. Your heightened response to things can make social navigation difficult.

Take Tony from My Wife and Kids. He was the funny, effeminate and super sensitive guy that was going out with Claire Kyle. You could find him doing weird stuff like this:

He would get easily distressed and fall victim to Michael Kyle’s tricks and teasing. Or you would find him wailing over Claire who broke up with often because of outrageous displays of emotions. She found it overwhelming and generally annoying. Sometimes manipulating him as well.

Poor old Tony really didn’t have it easy but, it was Tony’s love of God that kept him going. That was what kept him grounded and guided him through tricky situations.

For many of us, it can still be difficult. In friendships you can end up feeling majorly ostracised or hurt by the actions on others. You find yourself spending ages mulling over what’s been said, questioning if it was genuinely rude or not.

So how can we tell?

Well, I thought about this long and hard, but it boiled down to a simple test.

Is what they’re saying, true?

Okay, I know this may not sound like much, but hear me out. As a HSP it’s important to assess things in a constructive and positive way – and quickly! You can’t be outchea fretting, instead put those observant and analytical skills to good use.

Carol Lennox, a therapist in Austin, Texas, suggests that sometimes we overreact to things other people say not because they see us in a hurtful way, but because we see ourselves that way. “If somebody says something that you know is absolutely not true about you, that’s ridiculous, you’re not even going to get defensive; you’re probably going to laugh,” she says. “But if they say something that you feel is true, then you’re going to get hurt and angry.” So if you do find yourself throwing up defense, ask yourself, “What are they touching that I believe myself?”

That is, you ask yourself: am I hurt because what they have said it true or spot on, or is it not applicable to me whatsoever? By doing this you’re forcing yourself to reconcile with things that normally offend you.

And if it is true, it’s probably time to put being sensitive to the side and suck it up. Your friends are simply being honest and perhaps the only thing you disagree with is the tone in which it was delivered and not the statement itself. In that regard, it’s a lot easier to move from it. Those friends love and care for you and are doing their best to stay true to your bond. In return, learn to take some things on the chin.

If it’s not true, the likelihood is your sensitivity is actually uncovering a highly toxic friendship (see I told you being a HSP is handy!) And that means it’s time to get the hell away from there. Your friend is in reality, is gaslighting you (manipulating someone by psychological means into doubting their own sanity) which is never ever right. It then becomes a friendship where you’re either constantly made unhappy or feel like you can’t express yourself.

And this isn’t a personal reflection of you, this is about them.

According to Tiny Buddha “Being unkind, more often than not, is a reaction to anger with ourselves or our perceived inadequacy. When I was rude to other people, it was because I was afraid they wouldn’t like the nice me. I didn’t mind if they were angry at the fake, unkind me, because it really wasn’t me..When you find that people are being rude to you in your everyday life, they are really being mean to themselves.”

And you don’t need to stick around for this. You cannot control the actions and behaviours of others, only your personal reactions to them. If your HSP senses are alerting your intuition, it’s time to move on.

So, to all my HSP’s out there, being sensitive can be a beautiful complex thing. It can take you and your friends on an emotional rollercoaster. This doesn’t have to be entirely terrible, but highly informative and perceptive.

As a HSP myself, I’m slowly learning to use who I am to move forward. Applying that simple test, also known as the spirit of discernment, over the things people say to me. It’s a long tough road, fraught with breakdowns, genuine over-reactions and lows. Despite all this, I’m okay and you will be too.

One thought on “Am I sensitive or are my friends just rude?”